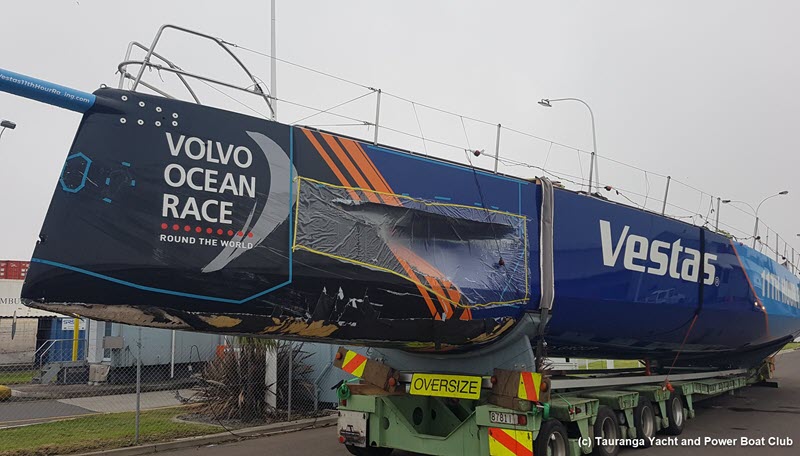 It was the fourth leg of the Volvo Ocean Race, and Vestas 11th Hour Racing was within 30 nm of finishing second after an arduous leg from Australia to Hong Kong. However, at 1:23 am on January 20 (local time), the crew of nine collided with a fishing boat, sinking the vessel, tossing its 10 occupants into the water which resulted in one fatality.

And since that moment, very little about the incident has been revealed.

From the tracker, the data showed the VO65 was traveling at 20 knots in 23 knots of wind. The waters off Hong Kong are historically chaotic with fishing traffic and container ships. We can only assume that while high speed reaching, with spray flying and the boat groaning, the sailors never saw the fishing boat.

With no details to share, only photographic evidence to this point has painted the picture. However, new photos disclose how the collision was more violent than originally suspected.

From what was initially shown, a significant gash along the port bow would require an extensive repair. Due to the strict one-design nature of the Volvo Ocean 65, a bow section was fabricated from existing molds at Persico Marine in Italy and transported to New Zealand. The boat arrived in Tauranga on February 12, and prior to being trucked 200 kilometers to a shipyard in Auckland where repairs will begin, the locals snapped photos that further disclose the extent at which the bow area was damaged, indicating how the VO65 had likely rode over the fishing boat, thus explaining how it could have sunk it. The goal is to re-launch in time for Leg 7 on March 18 from Auckland to Itajaí, Brazil.

Beginning on February 7, six of the seven teams are competing now in Leg 6 of the Volvo Ocean Race, which is listed as a 6,100 nautical mile course from Hong Kong to Auckland, New Zealand. For crew lists… click here.

Background: Racing the one design Volvo Ocean 65, the 2017-18 Volvo Ocean Race begins in Alicante, Spain on October 22 2017 with the final finish in The Hague, Netherlands on June 30 2018. In total, the 11-leg race will visit 12 cities in six continents: Alicante, Lisbon, Cape Town, Melbourne, Hong Kong, Guangzhou, Auckland, Itajaí, Newport, Cardiff, Gothenburg, and The Hague. A maximum of eight teams will compete.