History of the Bluenose Schooner

The Bluenose Schooner, the fastest boat in the World – Laughter echoed down the halls of the Halifax Herald office. Senator William B. Dennis, editor, had just scanned the sports page of a New York paper. “The New York Yacht Club,” the item read, ” has announced postponement of the race scheduled for today because of a twenty-three-mile-an-hour gale.” The America’s Cup race, the darling of yachting enthusiasts, was delayed because of winds that would barely tickle the sails of a Nova Scotia saltbank schooner. A Lunenburg skipper would yawn at the prospect of setting out in such a light breeze. 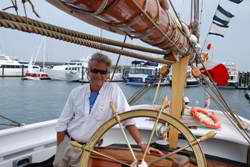 Glenn Walters on his great, great uncle’s schooner, the Bluenose

That tiny article in a 1919 newspaper inspired Dennis and other Halifax businessmen to create “The Halifax Herald North Atlantic Fisherman’s International Competition” between real working schooners. Over the next decades the Fisherman’s Trophy races would thrill the world and make one Nova Scotia boat, the Bluenose, an enduring symbol of the Maritime spirit.

The contenders for the trophy were the fishermen who worked the Grand Banks, sailing out for six weeks to two months to haul in cod and store their catch below in salt. Lunenburg, Nova Scotia was the home of the greatest deep-sea fishing fleet in the world, and proud of its shipbuilding and fishing heritage. Its rival was Gloucester, Massachusetts, which shared the same kind of pride. In fact, many of the Gloucester skippers had been born in Newfoundland or Nova Scotia. For generations, the “Yanks” and the “Novies” had delighted in racing each other to the fishing grounds. The prospect of formalizing those races excited both towns.

In truth, the great days of the saltbank schooners were reaching their close by 1919. A third of Nova Scotia’s wooden ships had been sunk by German submarines in the First World War. Half of the vessels clearing port in Halifax were steam-powered now, and with the price of salt cod falling, it looked like the days of sail were numbered. But tradition dies hard in the Maritimes, and the Grand Banks still teemed with fish. In spite of the backbreaking work, the freezing conditions, the everyday threat of shipwreck and drowning, and the slim wages (paid as shares of the catch), boys still dreamed of manning the wheel of an eight-sailed schooner and taking her through a North Atlantic gale, the hold packed tight with fish. The Fisherman’s Cup was a last opportunity to demonstrate the glory and courage of the schooner fleets to the world.

Captain Angus Walters of Lunenburg with the International Fishermen’s Trophy on board Bluenose.

The elimination races to determine the Canadian entry for the first Fisherman’s Trophy were held outside Halifax harbour on October 11, 1920. An excited crowd watched as the Delawana, skippered by Captain Tommy Himmelman, fought for the lead with the Gilbert B. Walters under Captain Angus Walters. On the last leg of the race, the topmast of the Gilbert B. Walters broke. The Delawana won the honour of representing Canada by five minutes, but talk around Halifax was about the brilliant tactics of Captain Walters. The Delawana faced the Yankee Esperanto for the Cup a week later. The trim American schooner, under Nova Scotia-born Captain Marty Welch, beat the Canadian in two out of three races and sailed back to Gloucester with the trophy and $4,000 Canadian dollars.

Nova Scotia pride was bruised that day, and plans for revenge were soon brewing. Senator Dennis and his moneyed Halifax friends decided to build a craft that would not only beat the Americans, but would be a symbol of Nova Scotian sailing superiority. They would name her Bluenose, after the traditional nickname for Nova Scotians, and they would pay whatever was necessary to make her Canadian sailing royalty.

But before they even commissioned a design, they recruited the best captain they could find – Angus Walters of Lunenburg. Unlike most schooner captains, Walters was a small, wiry man, but he was unmatched for his ability to size up the wind and squeeze speed out of every inch of sail. And he was as tough as they came: a tongue-lashing from Captain Walters could send the biggest hand below. Walters drove a hard bargain. He wanted the largest share in the Bluenose, which would give him the final word in her construction and management.

Angus got his deal, yacht designer William Roue drew up plans, and the Lunenburg yard of Smith & Rhuland began construction. When she was launched on March 26, 1921, all on hand agreed that the blue-black schooner was a beauty. To the experienced eye, the Bluenose had a few distinctive features, but the source of her speed was always a matter of debate. Was it because she was a trifle longer at the waterline than most schooners? Or that her timbers had been hardened by a particularly hard frost? Maybe her speed was the result of the magical relationship that developed between the craft and her captain.

Before she raced, the Bluenose had to prove herself on the Grand Banks. The rules of the Fisherman’s Competition demanded that any entrant work at least one season in the fishery. Besides, the Bluenose had to pay her own way – she was a fishing schooner, not a racing yacht. Today, with Atlantic cod stocks threatened, it is almost inconceivable that during the first decades on this century over one billion pounds of cod were caught each year on the Grand Banks. The Bluenose had a good first season, and she would more than prove her worth in subsequent years, landing a record 646,000 pounds in one haul in 1923.

At the end of that first season, in October 1921, the Bluenose sailed into Halifax harbour to test her speed against the finest Canadian schooners. The winner would face the American champion in the second Fisherman’s Trophy challenge. The Bluenose’s speed matched her beauty: she won two races handily.

She met the Elsie for the trophy. The American schooner was skippered by the same Marty Welch who had won the first Fisherman’s series. The two boats flew around the 40-mile course in strong wind. On the first day, the Elsie lost her fore-topmast. Gallantly, Angus Walters doused his own balooner, and still finished thirteen minutes ahead. In the next race, Bluenose completed the course with a lead of three miles. The news flashed by radio across the country: the Bluenose had brought the trophy home! Canada had beaten the U.S.! Overnight, the Bluenose became a national symbol.

The next year, the Bluenose retained the trophy against the Henry Ford. A fourth challenge, in 1923, was marred by a collision on the course, protests, and controversy. Angus Walters refused to complete the competition, taking the Bluenose home to Lunenburg rather than submitting to the judges’ rulings. His opponent, Captain Ben Pine of the Columbia, would not accept the Fisherman’s Trophy when it was offered to him. He had not beaten the Bluenose legitimately, and he would not take the prize.

Years passed. The last series had soured the competition. Besides, the Depression had hit North America, nowhere harder than the Maritimes. Fishermen stuck to their work, trying to eke out a living. There was little spirit left for racing. Then, in 1930, Ben Pine travelled up to Lunenburg with a proposition. The Thomas Lipton Tea Company would put up prize money to see the Bluenose race against the Gertrude L. Thebaud, the new American favourite. Walters hemmed and hawed, but he showed up in Gloucester for the race. The Bluenose was in poor shape, her sails old and loose. For the first time, she lost a series. Americans crowed, but at least they had not won the cherished trophy.

A year later, the two boats met for the rematch, this time with the Fisherman’s Trophy on the line. The Bluenose rose to the challenge, winning convincingly in both races. “The wood ain’t growin’ yet that’ll beat Bluenose,” Angus Walters loved to say.

Bluenose sailed to England in 1935 as Canada’s representative in the celebration of the twenty-fifth year of George V’s reign. The king was impressed by the Canadian beauty. On the way home, however, Bluenose encountered the worst storm of the many she had faced over the years. She keeled over and stayed down a full five minutes, masts and all. Then, with a shudder, the great boat righted herself again. Walters denied that he had ever doubted her strength. Her legend now included rising from the grave.

In 1937, the Bluenose was reproduced on the Canadian dime, where she has been ever since. Her last and greatest moment of sailing glory came in 1938. Bluenose faced the Gertrude L. Thebaud again for the trophy, this time in a best-of-five series. At the end of four tight races, the series stood 2-2. The Bluenose suffered damages, and began to look her age, but as she rounded the last marker of the deciding race, Angus pleaded, “One more time old girl, just one more time,” and Bluenose responded, winning the last Fisherman’s Trophy race by three minutes. Her average speed over the course was 14.15 knots, the fastest pace ever recorded over a fixed course by a canvased vessel in the history of sailing!

The final years of the Bluenose were sad ones. Powered vessels, steel hulls, and the demise of the schooner fishery made her a relic of a former age. Angus Walters tried to have her declared a national treasure and borrowed money to keep her afloat, but he was finally forced to sell her. She spent the war years carrying freight in the Carribbean. Then, on January 28, 1946, word reached Nova Scotia that the Bluenose had struck a reef off the coast of Haiti. Angus Walters wanted to fly to Haiti to direct salvage operations, but news was mixed, misinformation and confusion prevented action, and the Bluenose went down. No one has ever found as much as a splinter of the wreckage.

That is not quite the last chapter in the Bluenose story, however. In the early sixties, the Halifax brewery that bottled “Schooner Beer” put up money to recreate the Bluenose as a tourist attraction and provincial symbol. The Smith & Rhuland shipyard once again layed her keel, and in July 1963, Bluenose II was launched. Angus Walters was aboard her maiden voyage to the West Indies. Well into his eighties, he took the wheel. He silently studied the feel of the new Bluenose in the water and listened to the wind in her sails, as if searching for an echo. Finally, he told the hushed group that surrounded him, “She’s a wery fine wessel.” Captain Angus Walters died in 1968, but Bluenose II is still afloat, her home port Lunenburg, Nova Scotia. She remains a beautiful reminder of the greatest schooner of all time.