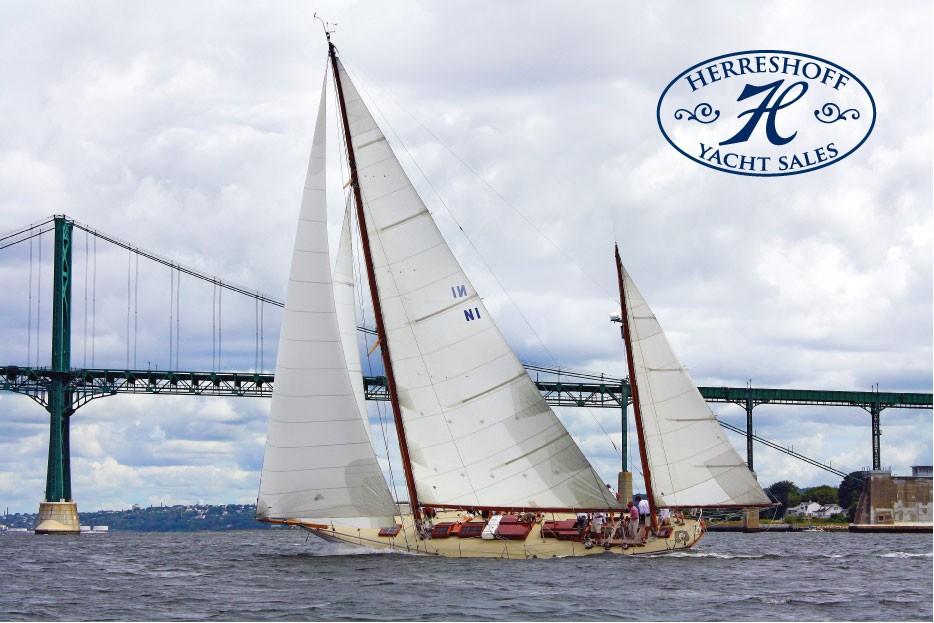 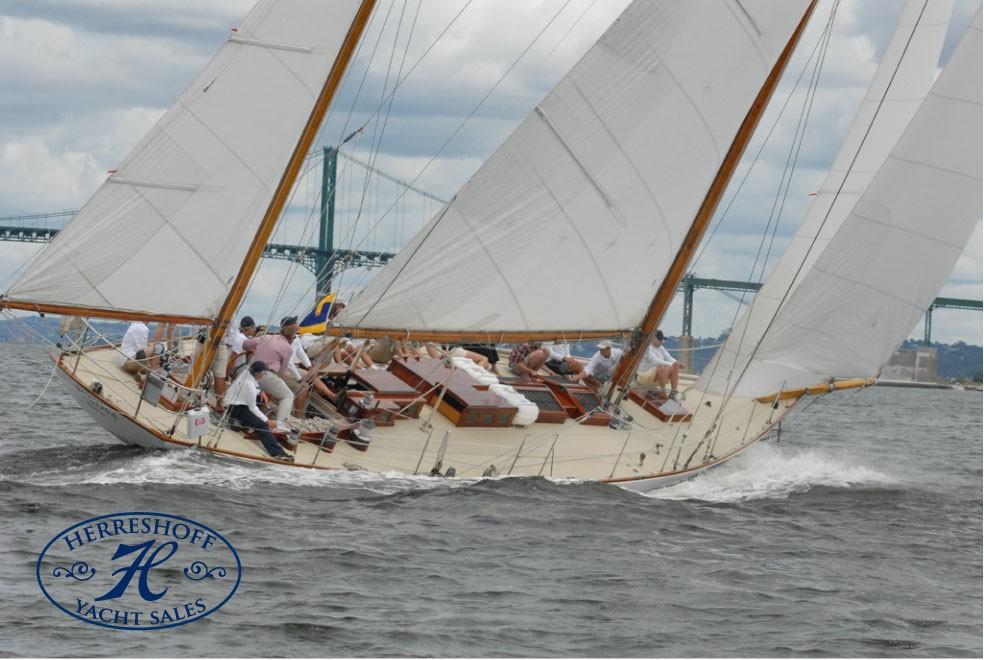 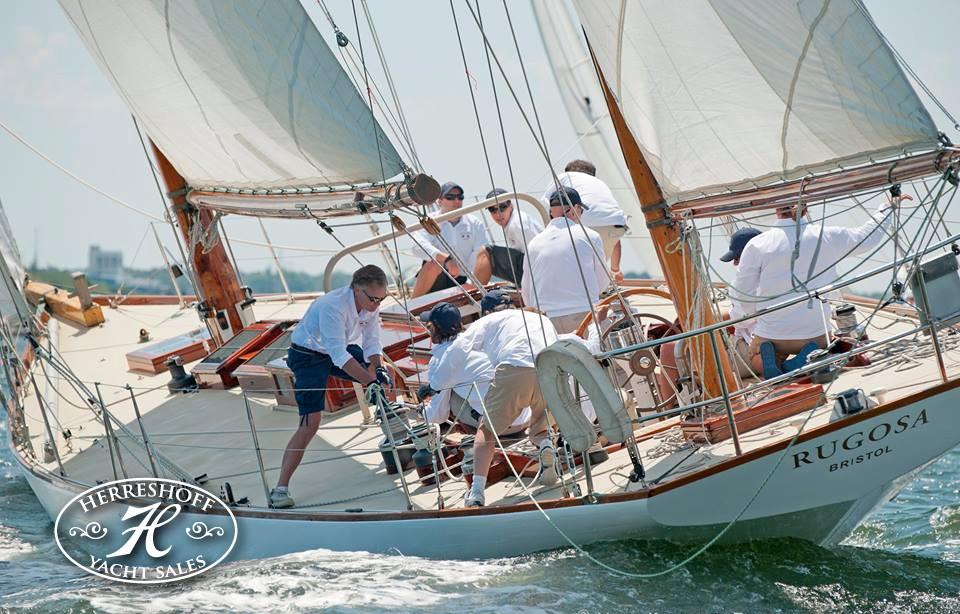 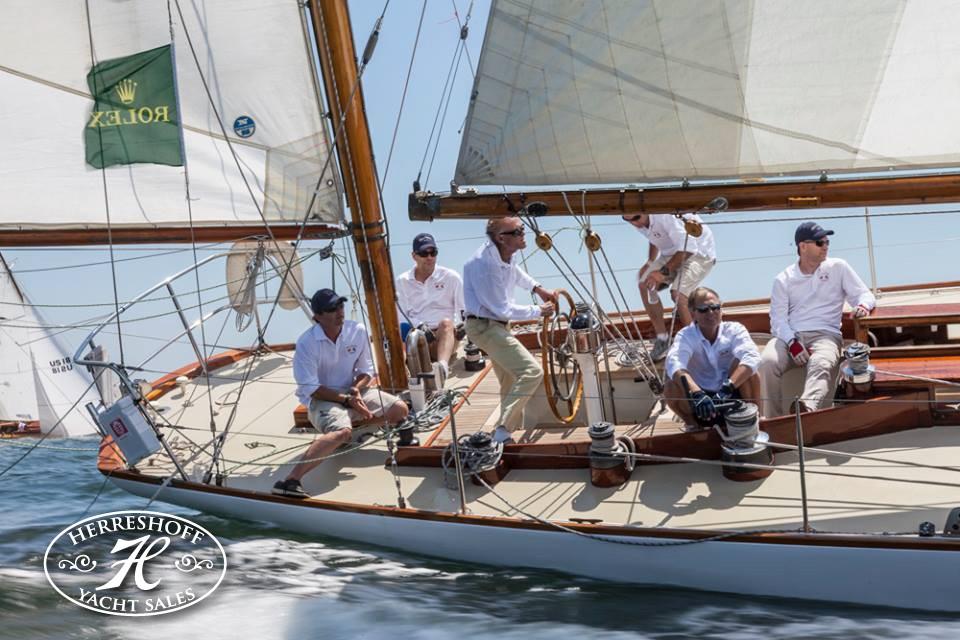 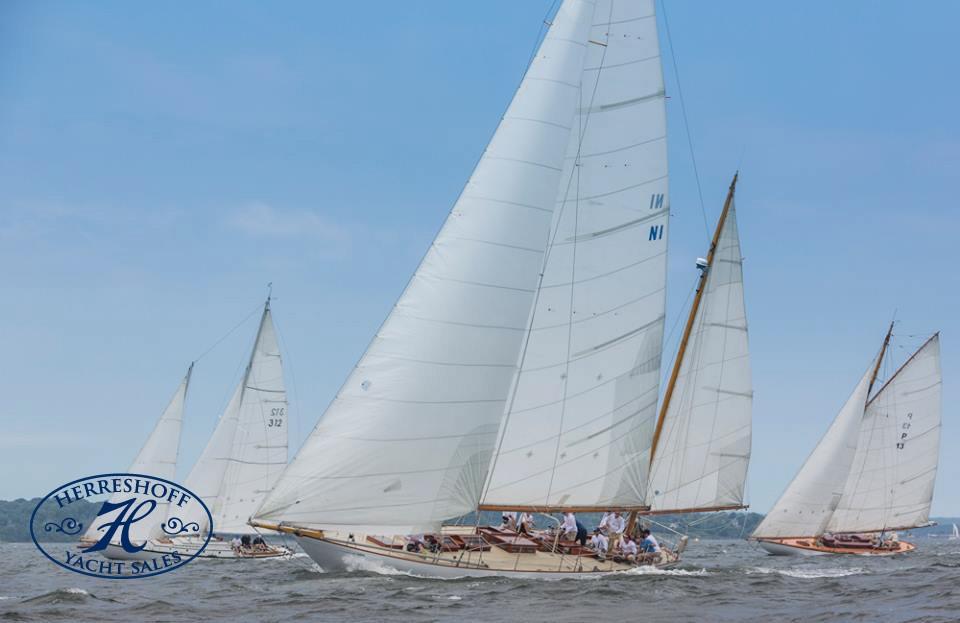 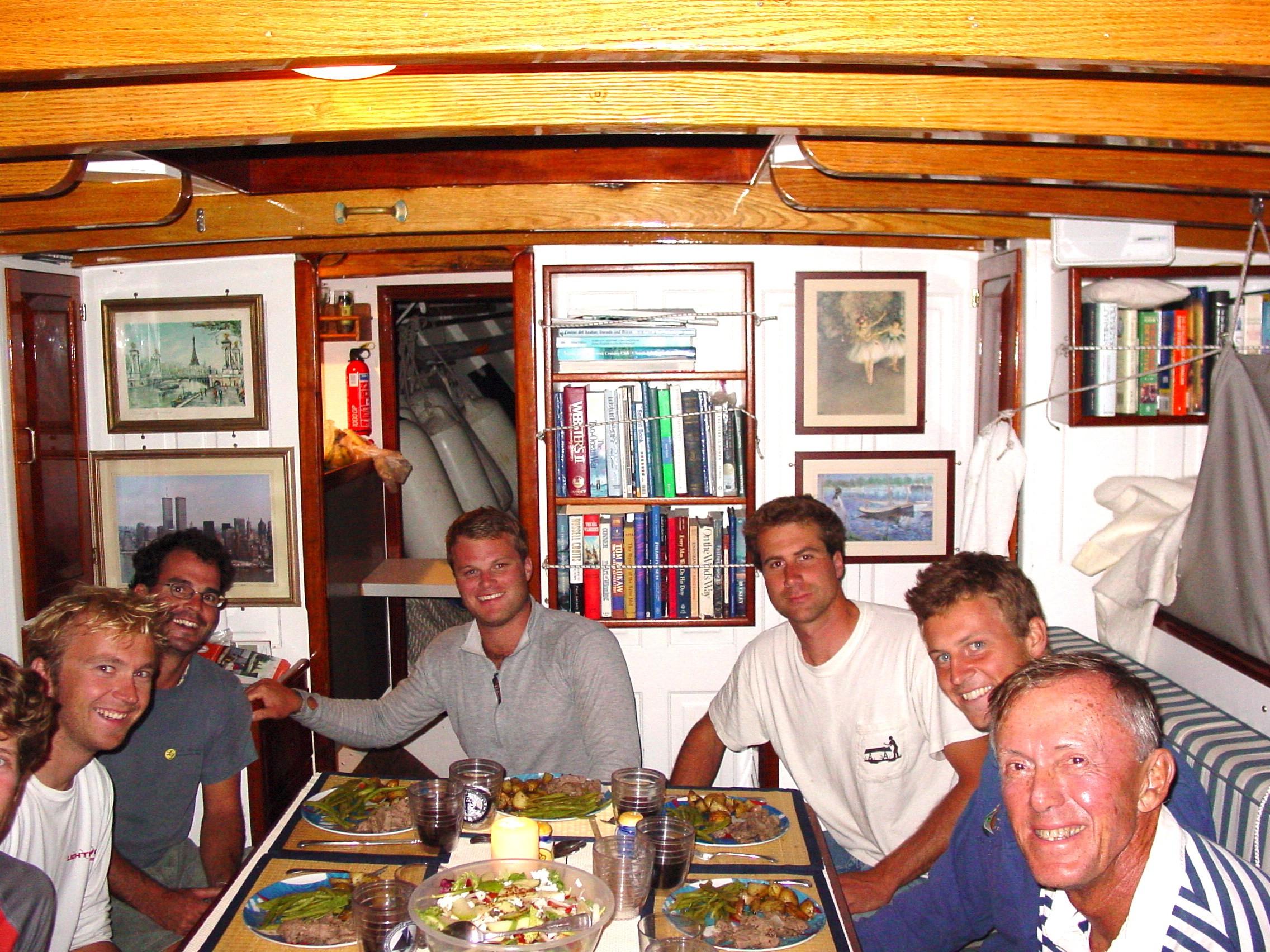 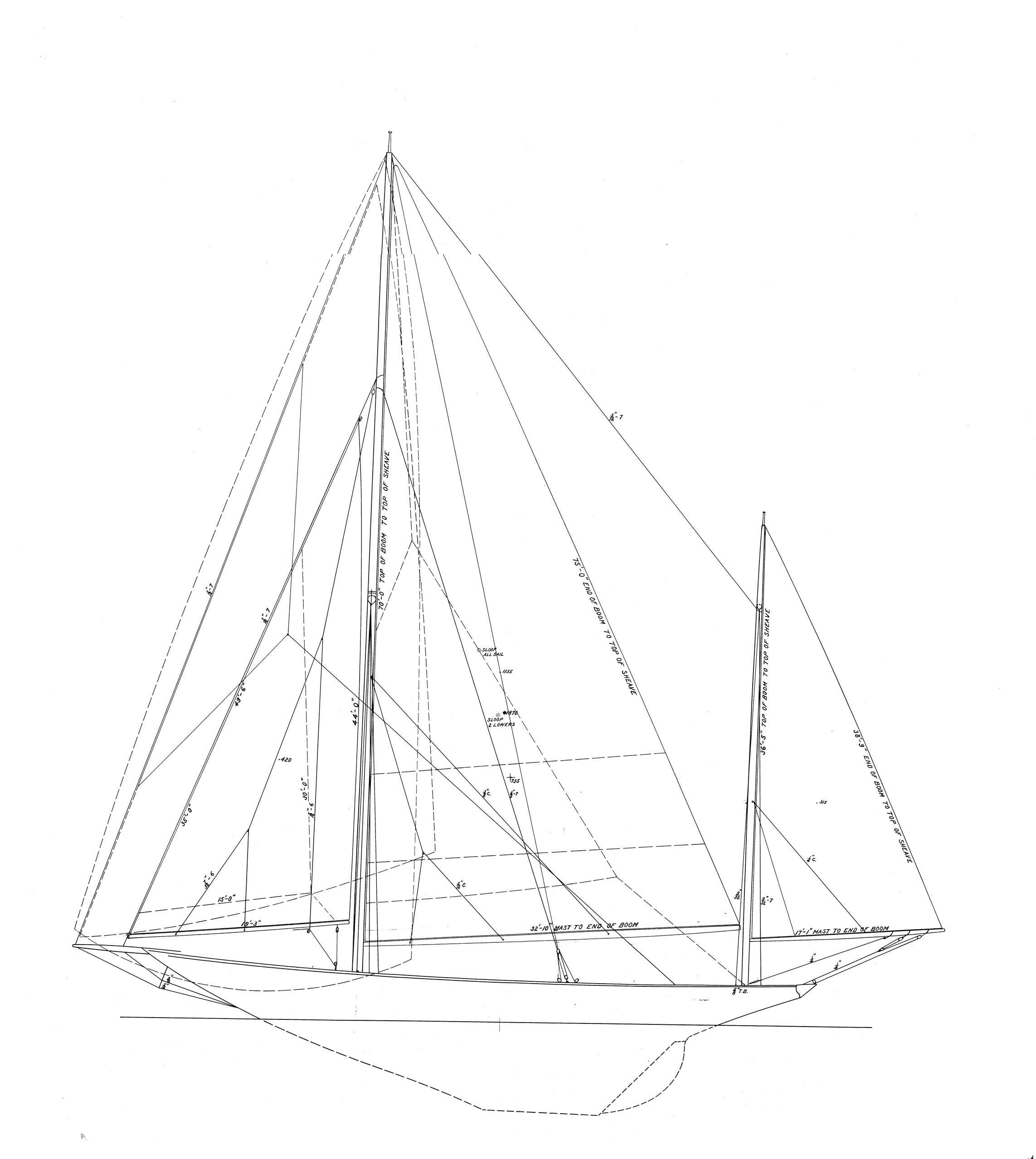 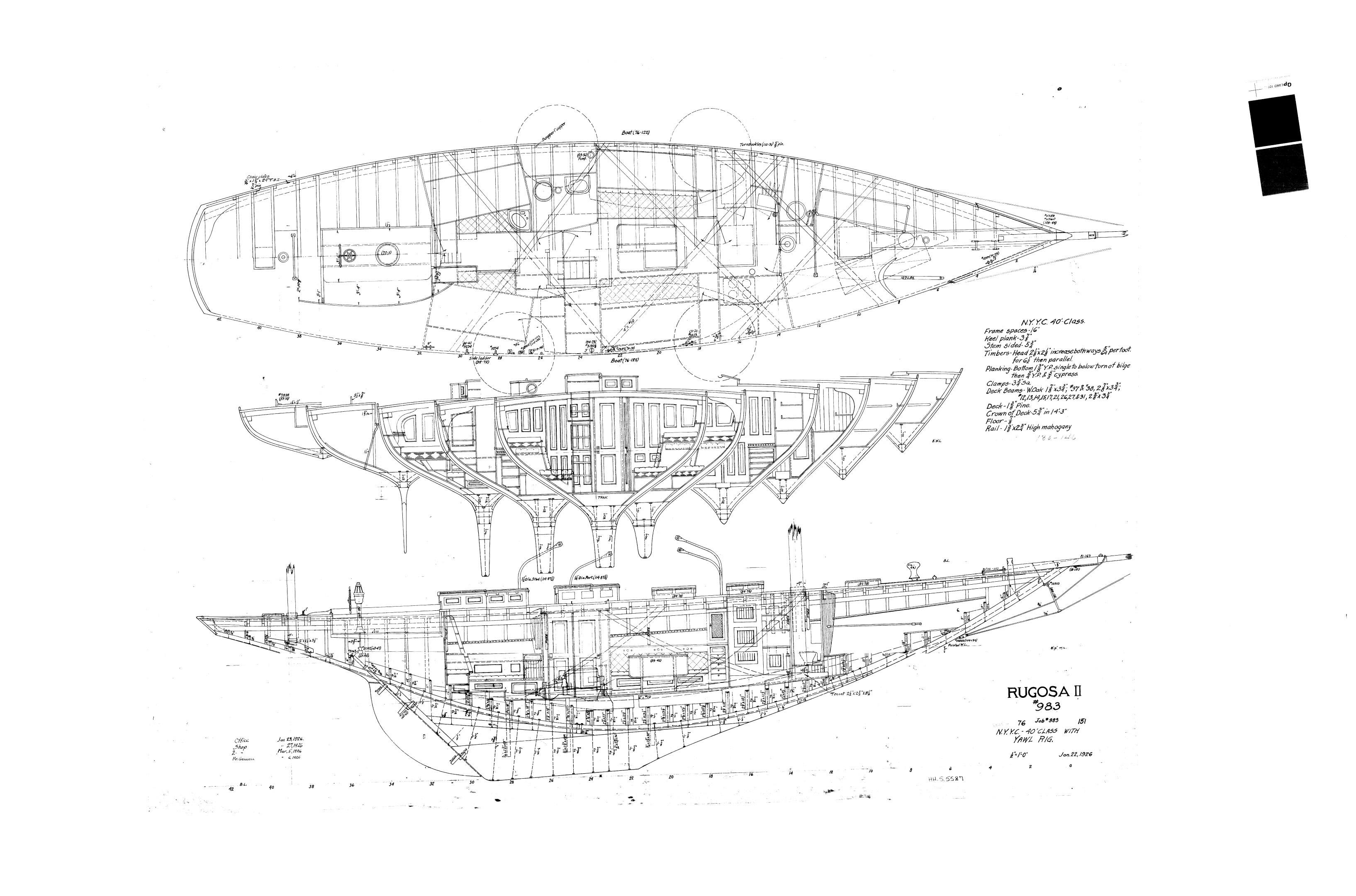 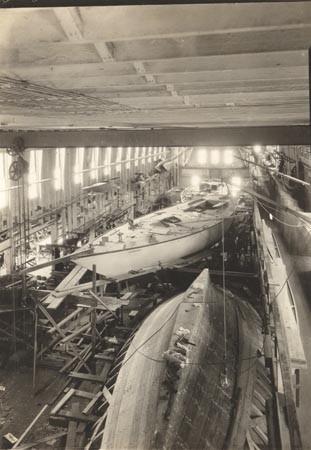 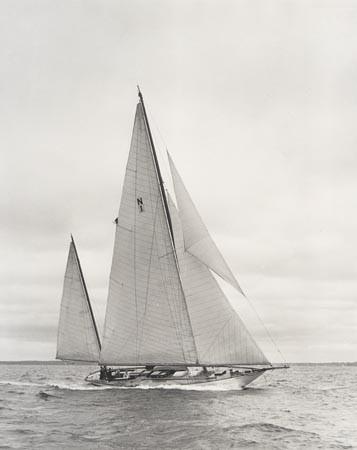 Have a question about this yacht?

Captain Nat earned the accolade "Wizard of Bristol"  for six consecutive wins of the America's Cup by yachts of his design and construction.  His early thrust into boat construction plus education at the famed Massachusetts Institute of Technology prepared him for signal accomplishments including the earliest U.S. Navy Torpedo Boats and numerous New York Yacht Club one-design classes such as the NY 40's including RUGOSA.

The eldest of Capt Nat's five sons, "Mr. Sid," as the loyal employees of the Herreshoff Shops addressed him, had a distinguished career in design and construction supervision at the family boat company.  With talents similar to those of his father, Sidney was also educated at M.I.T.  He was fascinated with steam and gas engines and with catamarans as well as engineering elements of yachts such as RUGOSA.

Halsey Chase Herreshoff follows in the footsteps of his famous ancestors.  Educated at Webb Institute of Naval Architecture and at M.I.T.  Halsey prepared designs of many stock classes of boats from which about 10,000 units were built.  He was Bow Man or Navigator aboard America's Cup yachts in 1958, 1974, 1980, and 1983.  His greatest sailing pleasures have been adventures on his NY 40 RUGOSA.

RUGOSA won the 1928 Bermuda Race under the ownership of her first of many owners, Russell Grinnell of Providence, Rhode Island.  That triumph was followed by notable successful racing under a succession of owners.  Then, for the past thirty years RUGOSA has raced under the skipper Halsey Herreshoff and his entirely amateur crew of sailing friends.  RUGOSA has won the famous Hyannis Mass.  FIGAWI race and the Classic Yacht races of the Newport RI Museum of Yachting and of the Herreshoff Marine Museum.  That plus victories in USA classic races or New York Yacht Club Cruise competitions has achieved considerable satisfaction.  In the summer of 2001, Halsey and mates sailed RUGOSA across the Atlantic to Great Britian.  There RUGOSA competed in the magnificent America's Cub Jubilee at Cowes, the Isle of Wight coming out first of 58 classic yachts competing from Britian, Europe and the USA.  Then, racing in the Mediterranean particularly off the south coast of France produced some notable victories for RUGOSA.  Thus the yacht RUGOSA fulfill ever so well the traditional intention for combined purposed of cruising pleasure together with racing prowess.  What a pleasure it is to happily cruise with family and friends interspersing with competitive racing on the same crew!  Isn't that really what our pleasures on the water are all about?

Prior to Halsey Herreshoff's ownership of RUGOSA, the yacht had much sea time.  Original owners, the Grinnell family,  cruised the Maine Coast extensively as did some subsequent owners.  One notable captain lived in Sweden, and for many years, sailed between Stockholm and the Caribbean Islands.

Halsey Herreshoff has sailed RUGOSA nearly 30 seasons covering the waterways from Maine to Florida on the USA East Coast.  Of particular note is his 26,000 mile cruise of RUGOSA, principally in European waters from 2001 to 2005.  RUGOSA encountered three heavy gales on her 18-day crossing from Rhode Island to Falmouth England with no trouble.  Sailing the south Britain coast and winning the Classic Division of the America's Cup Jubilee engendered fantastic experiences for Halsey and the all-volunteer crew of friends.  In 2002, RUGOSA sailed the Baltic during a particularly fine summer there, visiting Germany, Denmark, Sweden, and Finland plus St. Petersburg Russia and Talon Estonia.  Wintering over in Finland was followed by marvelous cruising (and some racing) in 2003 to Norway including the full length of the Songia Fjord.  The RUGOSA sailed the North Sea on the way to visit the Orkney Islands, Scotland, Ireland, England, France, Spain, Portugal, Gibraltar and Mediterranean ports.  Perhaps best was the sailing in 2004 to the famous Greek Islands and visiting Athens to view the Olympic Games.  Then proceeding westward by Gibraltar, RUGOSA experienced a great November crossing from Canary Islands to Antigua in the Caribbean, followed by a memorable winter of racing and cruising in those waters.

Halsey has stated the obvious:  "There is no greater water-bourne experience than sailing a great yacht like RUGOSA along with friends to anyplace in the world of interest and pleasure.

RUGOSA's spars are mostly original 1926 Herreshoff yawl elements kept well varnished in good condition.  The rig has been modified to a double spreader arrangement on the main to improve support  with a narrower sheeting impediment to sail trim.  Halsey has also replaced all standing rigging with 1x19 stainless steel, and the running rigging is generally modern standard low stretch rope.  Many sails exist for the yacht, mostly by North Sail Company for optimal racing shapes.

Well-constructed Classic Yachts can serve indefinitely given the right circumstances.  A great example is the three yachts  MARY ROSE, MARILEE and RUGOSA built simultaneously at the Herreshoff Shop in 1926.  Each of these, with some reconstruction elements are in great condition structurally and cosmetically, racing and cruising each season.  Essential are good owners, good preventive maintenance, and , only when necessary, reconstruction work well done by superior craftsmen.

Halsey Herreshoff reports the record of RUGOSA over three decades:  "Thirty years ago, I only bought RUGOSA after thoroughly surveying her to prove basic good strength for the long term.  I recognized that details needed attention:  spars, engine, sails and systems.  I was extremely fortunate to be able to purchase identical Herreshoff original spars from another NY 40 that had been abandoned.  With the changes I made in spreaders and standing rigging, these spars continue to serve admirable.  The engine and its systems were bad; replacement a few years ago with a new Yanmar four-cylinder diesel has totally satisfied that important need for cruising.  The interior was intact, but I removed all bulkheads to rework them for stronger installation.

Of particular importance is that over two periods of restoration work, we have replaced the keel bolts, stem, horn timber, garboard planks, and first boards (planks next up from the garboard planks).  And to further guard against any future trouble, we installed some rugged metal connectors to the floors which enhance strength even beyond that .  of the original construction.  As far as the rest, an experience doubly reassuring to me was that when I cut out a hockey-puck sized-piece of wood for hull instrument installation, that piece of original yellow pine wood exuded sap and was just perfect.  Aside from all that, I have only needed to accomplish normal routine Spring fitting out regarding fittings, lines, sails instruments and sails.  In that way, we generally sail during every week of the summer with little to do but some varnish touch up and having diver friends clean the bottom for speed racing"

RUGOSA is a New York Yacht Club 40 (Waterline Length).  The 40's are the most revered of a distinguished string of Herreshoff NYYC One-Design classes.  This is because they have the strongest racing record and best acceptance for family cruising.  They were dubbed "The Fighting 40's" during years of fierce competition. That sterling record continues among the Classics today, given the success of RUGOSA and sisterships such as the winning MARILEE and ROWDY, named "Boat of the Year" three times at St. Tropez.

The NY 40's were designed by Captain Nathanael Greene Herreshoff.  Those built in 1926, including RUGOSA, were fitted with Marconi yawl rigs designed by A. Sidney DeWolf Herreshoff.  Over his thirty years of ownership, Halsey C. Herreshoff has managed extensive improvements including structural elements, rig enhancements, modern winches, navigational gear, and sails.

The deck arrangement of RUGOSA has proven ideal for either racing or cruising.  Wide open area's fore and aft provide easy crew access.  Considerable thought evolved particularly sensible halyard and sheet placements for winches and belaying.  Thus, the yacht exhibits easy sailing with large crews or small number of weekend sailors.  RUGOSA has ample vertical hull dimensions for full head-room below under the deck without benefit of the two deck houses that contain hatchs.  There are nine bunks in the efficient open-arrangement design.  Two additional bunks exist under the cockpit which happy crew have named "The Cave"  The galley is forward as originally designed but is fitted with modern stove and reefer.  There is a handsome gimbled dining table amidships and aft a spacious table for charts, instruments and double seating for planning and navigation.

Disclaimer
Bluenose Yacht Sales offers the details of this yacht in good faith but cannot guarantee or warrant the accuracy of this information nor warrant the condition of this boat for sale. A yacht buyer should instruct his yacht broker, or his boat surveyors, to investigate such details as the buyer desires validated. This yacht for sale is offered subject to prior sale, price change, or withdrawal without notice. Bluenose Yacht Sales is pleased to assist you in the purchase of this vessel. This boat may be listed with another yacht broker.
×

Get More Info on