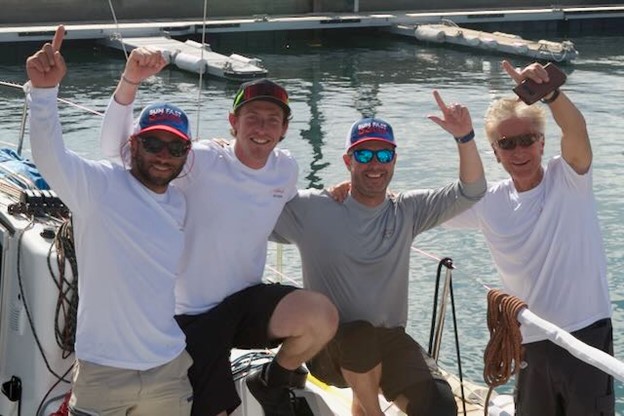 After watching the other classes start with clear blue skies, a fresh southwesterly wind and a ripping ebb tide, a violent thunderstorm ignited the AP and sucked the wind out of the area just prior to Alchemist’s scheduled start. After a 40-minute postponement, Alchemist started in torrential rain, large seas, and light winds.

Conditions steadily improved in the evening and overnight as the wind slowly built. By Saturday evening, Alchemist was ripping along in the high single digits to low teens and had overtaken the back half of the fleet. From then on, the wind continued to build and by Sunday the wind was blowing in the mid to high twenties with a full-day of perfect surfing conditions. The team consistently saw top speeds of up to 22 knots as Alchemist reveled in the big seas and strong winds.

“Sunday was a ripping day,” reported Glenn Walters, owner of Alchemist and Bluenose Yacht Sales. “We had the A4 up all day and consistently saw speeds into the low 20s. The boat handled well and was always in control. It was a fun and safe experience.”

With about 70 miles to go, the wind started to lighten up and it was a race to finish before the wind shut down completely. Even in the lighter winds, Alchemist held its own against much larger boats and glided across the finish line just after midnight on Tuesday morning.

“The Sun Fast 3300 never ceases to impress,” said Glenn Walters. “Even with the strong winds and big seas we encountered, we always felt in control and it was very satisfying to overtake boats 10-15 feet longer. The Sun Fast 3300 was designed to take on the world’s toughest oceans, and it lived up to its reputation.”

Shortly after finishing, the Alchemist team of Glenn Walters, Darren Walters, James Harayda, and Ryan Novak-Smith were excited to learn that on corrected time they were first in class and second overall in the Gibbs Hill Lighthouse Division.

“We are shocked and ecstatic to get first in class and second overall. The competition was really good, and fortunately we had a great team and a boat that excelled in the conditions,” said Glenn Walters. “We were the smallest boat in our class and division, which proves you don’t need a multi-million dollar boat and all-professional crew to win your class in one of the most prestigious ocean races in the world.”

The only other boat in the Gibbs Hill and St. David’s Lighthouse divisions to beat Alchemist on corrected time was Warrior Won, a new Pac 52 sailed by an all-professional crew, which corrected out to win by only 37 minutes.