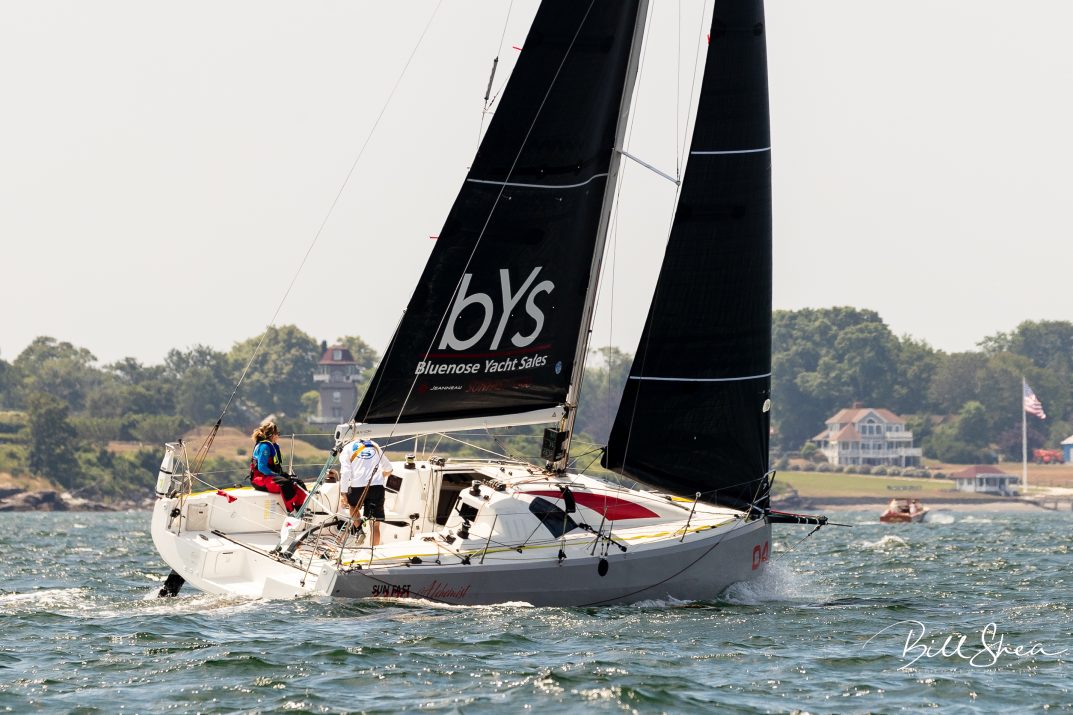 The Sun Fast 3300 delivered strong results at the 2022 New England SOLO/TWIN Championships this past weekend. Last year’s winners, Ken Read and Suzy Leech, returned to top Class 1 with another resounding victory in Alchemist, a Sun Fast 3300, beating a well-sailed J44 by almost 25 minutes on corrected time. The Bluenose Yachts team of Glenn Walters and Jonathan Banks sailed the Sun Fast 3300, Arkana, to a fourth-place finish. Loblolly, a Sun Fast 3600, sailed by Michael and William Greene, came in fifth.

The 2022 New England SOLO/TWIN Championships started in Newport on Friday, July 29 in perfect conditions with a fresh southwesterly breeze. After a 25-mile beat to the southern point of Block Island, the fleet had an exhilarating downwind sail in winds gusting to the high teens to the second turning mark at the entrance to Vineyard Sound. To add to the excitement, the wind failed the fleet completely on the beat back to Block Island for over two hours, leaving all competitors wallowing and waiting for the new breeze to fill in. Daybreak brought light puffs of wind which gradually filled to the low teens for a fast reach back to the finish.

“These style of races are typically won and lost at night,” said Ken Read, skipper of Alchemist, just prior to the start, which was certainly the case for this year’s SOLO/TWIN. “This race had pretty much everything—breeze, drifting, reaching, beating, running…I think that Suzy and I are very familiar not only with each other’s skills on the boat but the capabilities of the boat itself.  That is probably a factor when going through such changeable conditions.”

“We added up our sail changes during the race and it was something like 11 changes. It was kind of crazy, but we treat the boat like it’s a crewed boat and just do what is right at the time,” said co-skipper Suzy Leech. “There is no doubt that the boat being so well set up for shorthanded racing becomes an advantage for us when the going gets weird!”

On August 19, Read will team up with Sara Stone, co-skipper and winner aboard Alchemist in the 2022 Bermuda Short-Handed Return Race, to compete in the Doublehanded Division of the Ida Lewis Distance Race, which is sponsored by Bluenose Yacht Sales.