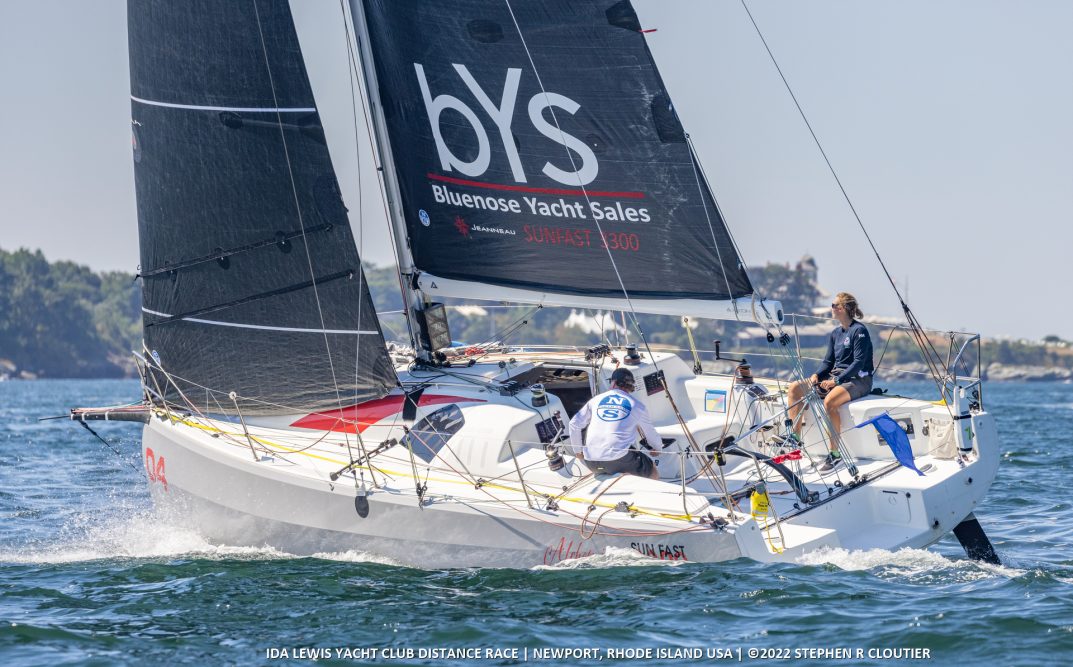 Congratulations to Ken Read (Portsmouth, R.I.) and Sara Stone (Marion, Mass.) for winning the Doublehanded class of the 2022 Ida Lewis Distance Race in the Sun Fast 3300, Alchemist. Peter and Duncan Bacon finished 4th in their Sun Fast 3300, Arkana, only minutes behind the second and third place finishers. This is the second time Ken Read has won the race, following his victory in 2020 with co-skipper Suzy Leech (the race was cancelled in 2021 due to an approaching hurricane).

The 2022 Ida Lewis Distance Race presented by Bluenose Yacht Sales started on Friday, August 19, with competitors returning throughout the day on Saturday, August 20. The race got underway in a building southwesterly breeze, which grew to the high teens and low 20s in the afternoon and early evening. The winds subsided overnight to nearly nothing at points, making this one of the trickiest races in recent memory.

On the upwind leg from Buzzards Bay to the turning mark off Montauk, Alchemist and Arkana rounded Block Island to the north, whilst a few boats in their class opted to take the more traditional route to the south of Block Island.

“We spent the next three hours not having any idea if we had made the right choice or not,” said Read. “There were basically three parts to the race: the first part was straightforward as we headed to Block Island; the second part was which side do you round Block Island; and the third part was mentally staying in the game after Block Island because of a big ‘drift out’ where the wind had died and we basically started the race all over again.”

“It was good to get back in the groove of the Ida Lewis Distance Race,” said Race Chair Anselm Richards. “It was fun and challenging and came down to making lots of decisions, and those had to be the right ones for the winners.”