The deck layout is designed for the pure pleasure of sailing, thanks to a completely uncluttered design, large sunbathing areas and an opening bathing platform to enable easy access to the sea. With flush deck hatches, outboard chain plates and under deck lines, all trip hazards have been completely eliminated allowing quick and easy movement around the boat. The German mainsheet system and the non-overlapping jib ensures easy control even with reduced crew.

NOTIFY ME OF A PRICE DROP

Here is a sleek Italian looking boat built by Cantiere del Pardo for its Grand Soleil series. This is a team design with the hull, rig and appendages by Botin and Carkeek, the interior by Mauro Sculli and the deck styling by Attivo Creative. Botin and Carkeek will be a new name to many United States cruisers but over the last seven or so years they have created a number of very fast European racing boats, namely in the IMS and IRC classes. In going with Botin and Carkeek for the hull design, Cantiere del Pardo was ensuring good performance for its new model.

The brief given to B&C for the hull was for a boat that could do well under a variety of rating rules. The D/L is 161, which is light for a cruising boat but certainly in the optimal range for an IRC boat. Beam is on the broad side of medium with an L/B of 3.27. The hull carries its beam aft and photos show the leeward transom corner digging in at a moderate heel angle. You can have an IRC optimized keel or a more moderate draft keel for cruising. The specs list draft at 8 feet, 4 inches with a T-fin and bulb configuration, and I assume this is the IRC keel. The sailplan drawing shows the hull profile with a very distinct knuckle around station No. 2 fairing abruptly up to another knuckle at the forefoot, well above the DWL. Interesting. 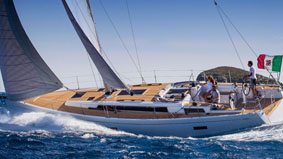 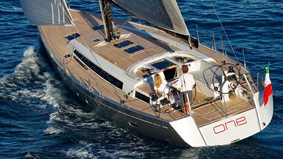 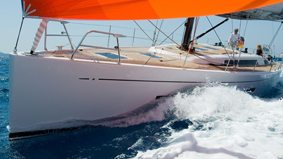