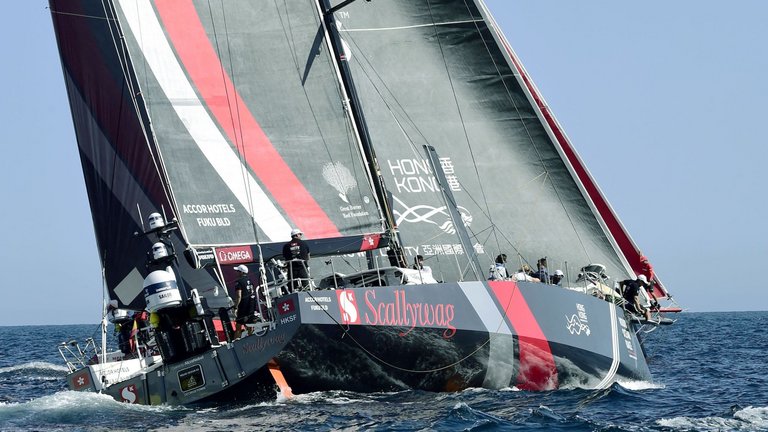 Fast forward to the early stages of Leg 6 where Scallywag again finds itself on the inside track, cutting the corner on the right hand turn to the south towards the finish line in New Zealand.

Just over two days ago, Scallywag and AkzoNobel, were seemingly marooned 120 miles behind the leaders, punished by a decision to head north immediately after passing Taiwan. But as of 1900 UTC today, both teams now top the ranking.

“They have been dealt a lucky card, annoyingly,” said Dee Caffari, the skipper of Turn the Tide on Plastic. “They made a mistake, really, but they’re going to stay in this cold front longer. They’re going to be happily sailing in 20 knots, while we’re dealing with this transition.

“But they will have a worse angle in the longer term. We think it will pay to be further east and we’re hoping it does pay off for us eventually.”

The transition to the new breeze means the group of four boats positioned furthest east (but also further to the north) are currently sailing in light, unstable winds, trying to make gains to the east to pick up the trade winds.

MAPFRE, Turn the Tide on Plastic, Dongfeng Race Team and Team Brunel are all within sight of each other, separated by eight miles, and all are struggling to make progress. But on the other side of the transition, in the new breeze, conditions will be good for making miles south towards the doldrums.

“It looks like a pretty quick transition into about three or four days of tight reaching. We’re looking forward to getting into it,” said Team Brunel’s Peter Burling. “The wind will slowly build as we get into the trade winds, and we’ll be reaching with the wind at about 65-degrees. We’re pretty happy about that because we seem to be pretty quick in those conditions.”

But for the moment, it’s Scallywag and AkzoNobel who are reeling off the miles, trying to build enough of a buffer to lead through the trade winds and into the Doldrums.

Beginning on February 7, Leg 6 is listed as a 6,100 nautical mile course from Hong Kong to Auckland, New Zealand.

Damage: Only six of the seven teams are competing in Leg 6 as Vestas 11th Hour Racing is repairing their boat following the collision with a fishing boat as they neared the finish line of Leg 4 in Hong Kong. The team shipped their boat to Auckland to complete repairs in time for the March 18 start of Leg 7 to Itajaí, Brazil.

Damage update: Vestas 11th Hour Racing yacht was offloaded February 12 from the transport ship in Tauranga, New Zealand, and was then transported that evening by truck 200 kilometers to a shipyard in Auckland where repairs will be done. The goal remains to re-launch in time for Leg 7 to Itajaí, Brazil, on March 18th.

Background: Racing the one design Volvo Ocean 65, the 2017-18 Volvo Ocean Race begins in Alicante, Spain on October 22 2017 with the final finish in The Hague, Netherlands on June 30 2018. In total, the 11-leg race will visit 12 cities in six continents: Alicante, Lisbon, Cape Town, Melbourne, Hong Kong, Guangzhou, Auckland, Itajaí, Newport, Cardiff, Gothenburg, and The Hague. A maximum of eight teams will compete.

(February 12, 2018; Day 6) – On Leg 4, racing into their home port of Hong Kong, SHK/Scallywag made a radical choice exiting the doldrums, cutting the corner and taking the inside track towards the finish line. As a result, they sailed less miles and passed the entire fleet en route to a spectacular victory.