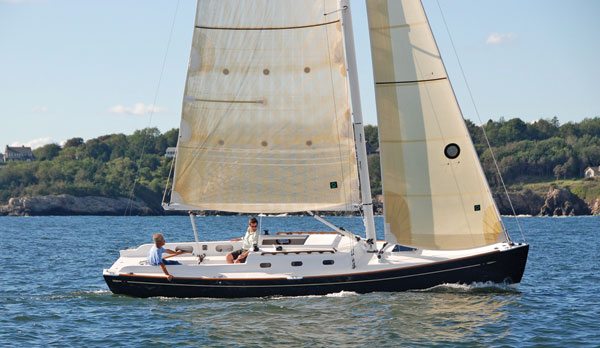 The Sparkman Stephens 30 will be on display at the San Francisco Boat Show on Jan. 23-26, 2014. The S&S 30 was named 2013 Boat of the Year by SAILING magazine and is now being represented in San Francisco by Elixir Yachts and distributed world-wide by Bluenose Yachts.

Bluenose Yachts and Elixir Yachts invite you to attend the San Francisco Boat Show this weekend to climb aboard the Sparkman Stephens 30 making her debut in California.

Bluenose Yacht Sales is working with Elixir Yachts in San Francisco, California as a stocking dealer for the Sparkman Stephens 30. The S&S 30 is an award winning Boat of the Year in 2013 as selected by a panel of judges from SAILING WORLD magazine.

Elixir Yachts was founded by long time sailing enthusiast, Mike Conrad, who has many successful years in high technology and decided to branch out into the yacht sales market as the S&S 30 dealer in northern California.

The S&S 30, “BABE” was reintroduced by Sparkman Stephens design team, who engineered a great sailing, easy to handle, comfortable daysailor/weekending, beautiful new family yacht with a pedigree from a 1935 Olin Stephens #97 design. Sporting a modern keel and efficient hull design while maintaining proportions and deck house lines of the original. The GORDONE E, hull #3, took third place on day five of Block Island Race Week in a ocean class race where a SWAN 56 took first place.

Bluenose Yachts, is the exclusive distributor for the Sparkman Stephens 30 and is one of New England’s leaders for quality brokerage yachts as well as representing Beneteau Group’s Jeanneau and CNB Bordeaux 60 & new CNB 76 brands combined with the new S&S 30, Grand Soleil, and Cabo Rico.

Test sails will be available after the show.