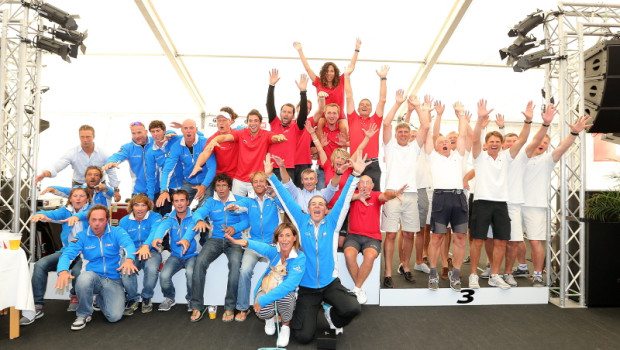 Kiel, Germany (August 9, 2014) – As if an intentional counterpoint to the light winds found during most of this week, the final day and final race of the 2014 ORC World Championship had strong gusty winds, alternating rain and sun, and the same steep choppy waves that are so famous for Kiel. In these conditions new champions were born and the remaining podium positions filled after nine races among the 151 entries from 19 countries in this event. In all, the podium was filled with teams from Italy, Germany, Estonia, Czech Republic, the Netherlands, and Sweden. Alberto Rossi’s Enfant Terrible from Italy, Jaak Jögi’s Forte from Estonia, and Giuseppe Giuffre’s Low Noise from Italy are all crowned as new ORC World Champions

On the strength of their domination of Class C and the Jury’s dismissal of an attempt to re-open a protest last night against them and two dozen other entries, Giuseppe Giuffre’s Low Noise from Italy knew they had earned their third World title crown and did not have to brave the wind and rain today.

“I have looked to the GPH for the positioning in the fleet to remain in Class C,” said designer Matteo Polli, whose optimization work has helped get the Low Noise team into the winner’s circle. “The M37 has always been performing very well in medium-heavy conditions but the challenge has been to improve in the light conditions. In 2011 I designed the new keel and that has been a huge step in this direction. Then after the big changes in the VPP I decided to go heavier with a little bow down trim. I know it may seem strange but this has helped even more in the light winds.”

While not quite as dominant in Class B as Low Noise was in Class C, Jaak Jögi’s X-41 Forte was in a similar situation last night when they too learned they won the title for their native Estonia and would have the day off. While Jögi is not new to winning – he was the 2006 X-99 World Champion – their preparation strategy focused more on the software than the hardware, as well as sensible big fleet sailing tactics.

“We did not know before the worlds what to expect, even if it was clear that the X41 fits well in the ORC system,” said Jögi. “With a good performance we were hoping for a top 6 position. We sailed very conservatively, and have avoided taking risks, so it was good speed and good starts that led us finally to success. In Estonia we have some good competitors and we have training a lot at Wednesday regattas at home.” Jögi’s Gold medal team included Alar Volmer, Kalev Kaal, Marko Nuud, Olaf Sylla, Ando Raud, Kalev Vapper, Tammo Otsasoo, Martin Kaal, and Indrek Rajangu.

With the winners determined, the remaining fights in these classes were to fill the remaining positions on the podium. In Class B this could not have been tighter, with the Bronze and Silver medal winners ending up tied on points and an extremely close margin in corrected time that just a few seconds different could have produced a completely different outcome. Peter de Ridder’s Dutch Swan 45 Checkmate’s third place in this final race was only 4 seconds ahead of Christopher Opielock’s Corby 38 Rockall IV in fourth, and only 15 seconds ahead of Milan Hajek’s Czech Beneteau 40.7 Three Sisters in fifth. Even the slightest change could have deprived de Ridder and his team of their Silver medals, or even the Czech team their Bronze medal performance.

In Class C, the race for the Silver and Bronze medals was also quite close at times, although Patrik Forsgren’s modified Beneteau 36.7 Team Pro4U from Sweden and Martin Nilsson’s Salona 37 Vencom had a good enough margin coming into the day to only need a top ten finish to earn their respective positions on the podium.

This left Class A to provide the real excitement of the day to produce their winners. Claus Landmark’s Landmark 43 Santa from Norway had been leading all week on some impressive scores earned in the first few days of racing with no discards yet applied. But as soon as steadier conditions prevailed and the discards dropped the worst scores, this lead started melting away to be only four points coming into today.

The strong breeze and big waves were just what the lighter boats were waiting for all week, so even with a 100 seconds/mile corrected time margin owed to Santa, Alberto Rossi’s TP 52 Enfant Terrible from Italy defeated not only them but all the others, planing and non-planing alike. With this first place and an additional several points between them and Santa, Enfant Terrible won their third World Championship title in four years.

“I think ORC racing is very good, very close, the system is working well,” said Rossi, who is also active in the Farr 40 Class circuit. “We have many different types of boats here, but when they are sailed well anyone can have the chance to win.”

For complete information about the 2014 ORC World Championship, visit the event website at www.orcworlds2014.com.

For more information on ORC and ORC classes and events, visit www.orc.org.
Since 1969, ORC has provided the most scientific and transparent VPP-based rating system in the world, used to create fair racing among a broad variety of boat types.ORC Rating products and services are used in 35 countries around the world, and ORC organizes the annual ORCi Offshore World Championship, sanctioned by the International Sailing Federation (ISAF).