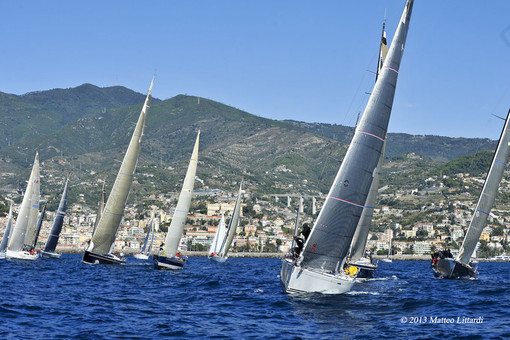 It started the thirty-first edition of the 2014/15 Winter Championship Sailing West Liguria, organized by the Yacht Club Sanremo.

The first event, last weekend, was represented by traditional Trophée Grimaldi organized jointly with the Yacht Club Monaco, has seen as many as 52 boats engaged Saturday 25 from San Remo to Monte Carlo and Sunday 26 on the reverse path.

The Saturday began with a hearty English breakfast, at the headquarters of the Yacht Club Sanremo, at 11. With a wind from the east ten to fifteen knots took away the first stage that this year ‘introduced Announcements of the gate in front of the place almost completed the port of Cala del Forte Ventimiglia, while on Sunday, contrary to expectations, the fleet set sail from Monaco with a light breeze from the southeast, which has failed in the afternoon, bringing most of the crews to retreat. The first boats arrived in Sanremo around 14.30. Four nations represented, with boats flying the flags of France, Monaco, Spain and, of course, Italy.

Turned on right now was the fight for the overall classification Overall, with the statement of Sanremomare Emanuela, Magliocchetti of Joseph. Second place went to Flying Cloud, Noli David, and third place for Aps Irruenxa, Scandolera of Matthew. All three boats of the Yacht Club Sanremo.

With these results Sanremomare Emanuela was also first in the ranking of the class B Orc, before Aps Irruenxa and Varenne. In Orc A to reach the top of the podium was Flying Cloud, followed by Free Spirit of Paolo Rossi and Mc Seawonder of Vittorio Urbinati. In IRC class won first place always Sanremomare Emanuela, followed by Flying Cloud and Aps Irruenxa.

Great satisfaction for Botta Straight, Advance 66 Adalberto Miani sports director of the Yacht Club of Monaco which was the first boat to reach the mark of Cala del Forte, in real time, winning the special prize offered.

Are obviously not been moments gala and socialization, culminating in the festive evening at the Yacht Club of Monaco, Saturday, and in the final awards ceremony, which took place Sunday at the Yacht Club Sanremo, immediately after the end of the competitions.

Next meeting of the 31 ° West Liguria will be the Autumn Regatta, the second stage of the competition. The boats will meet again, in the waters of Sanremo, in the weekend of 15/16 November, 29/30 November and 13/14 December.