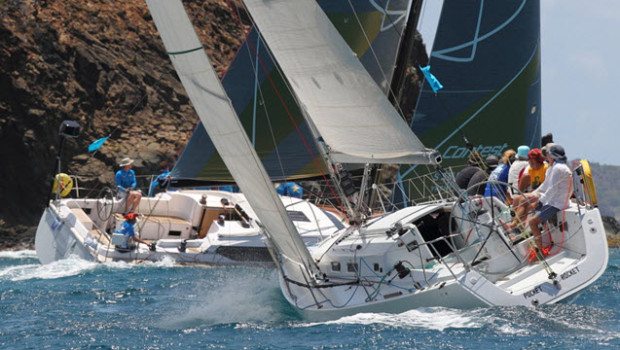 Several classes hung in the balance and the outcome of a whole week of racing was to be decided by seconds in CSA 2 & CSA 4. The last day of racing provided the windiest conditions of the week. Gusting up to 20 knots with an agitated sea state, the spray was flying off hulls on the south coast of Antigua and there was a ‘Cinderella moment’ for one of Antigua’s veteran yacht racers.

When the course was announced for CSA 0, Tonnerre de Breskens 3 knew they had it all on today, a 22-mile windward leeward eight mile offshore into big waves with a beat finish! The breeze was up and so was the sea state and the bigger yachts, especially TP52, Balearia/Team Varg could plane away downwind, surfing off the Caribbean swell. Balearia/Team Varg hit the turbo button off the wind and screeched downwind away from Tonnerre de Breskens 3. Carlo Vroon, son of Tonnerre owner Piet, explains the outcome:

“We got a good start and managed to keep our time on the other yachts upwind. The crew had to work hard, hiking the boat out and we managed to be seven minutes ahead on corrected time by the top mark. We knew that we would lose out on the run and once again we played the shifts well and stayed in pressure, but our lead had been eroded for the final beat to finish. We won the race by three minutes to finish off a highly rewarding Caribbean season. We have been racing in Florida and the Caribbean since January and our worst result in any race has been second, it has been a memorable season.”

This morning, Pocket Rocket had scored a perfect seven bullets securing CSA 7, but the perfect eight was to elude the team: “It is the first time we have really made any major errors, but we had problems hoisting our spinnaker today. If you had offered me seven first places and a second at the beginning of the week, I would have said – thank you very much! The lads’ heads are down but I don’t think that is right and I have a couple of bottles of champagne to cheer them up. We have had a fantastic week and congratulations to the organisers for laying on a very enjoyable and well run regatta.”

CSA 4 provided the closest finish of the entire regatta. Ian Hope Ross’ Melges 32 Kick ‘em Jenny 2 took line honours for Race 8, but corrected out to 6th place for the race putting the team from Sint Maarten out of contention for the class title. Next to finish was Bernie Evan-Wong’s Mumm 36, High Tension, which stayed in the vicinity of the finish line to see how far back the Cork 1720, Team Sojana was from their transom. About 11 minutes would be enough after time correction for High Tension to win the class. The result was too close to call, but High Tension won the race and the class by just 14 seconds:

“Amazing!” smiled Antigua dentist, Bernie Evan-Wong, when he got the news. “This team has been racing at Caribbean regattas all season and to win the last one on home soil is just fabulous. This morning we thought we might not race at all though. Just before the start, we developed a big problem. Our chainplate was coming loose, fixing the rig to the hull. ABSAR came to our rescue, quite literally! They gave us a lift to shore to get materials to fix the problem and we set off on the race. High Tension would like to say a big thank you to ABSAR!”

In Bareboat 1, Kiev Racing Yacht Club finished off the regatta on a high by winning the last race by 34 seconds. Domas Vysniauskas’ Lithuanian team racing Jeanneau Sun Odyssey 44i/Sunsail, Tintamarre, crossed the finish line in a dead heat with Colman Garvey’s Irish KH+P Bageal. The Lithuanian team had rather a large number of supporters out on the water and there was a lot of cheering as they crossed the finish line! Colman Garvey’s team could also celebrate as the team from Ireland had won the Bareboat 1 Division.

After racing, the daily prize giving was held on the lawn at the Antigua Yacht Club with Latin DJ number 7 playing the tunes. Tonight the 47th edition of Antigua Sailing Week will come to a conclusion in Nelson’s Dockyard with the Final Awards Ceremony & After Party with DJ Purist and the legendary Asher Otto & Itchyfeet playing live.