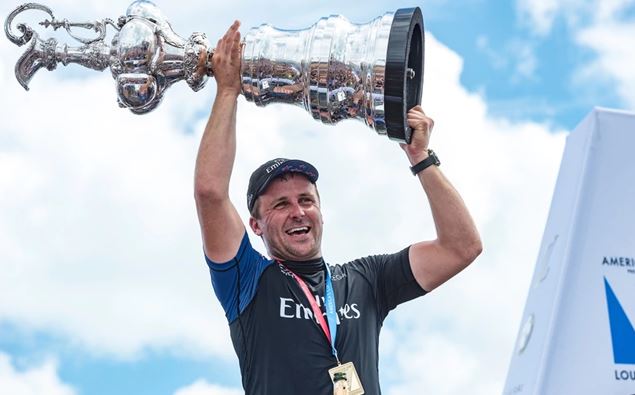 Simon van Velthooven, an America’s Cup Champion doesn’t actually know how to sail. He is an Olympic cycling bronze medalist. Since cyclists most likely won’t be needed on the new America’s Cup desin, he is determined to learn how to sail in order to save his spot on Emirates Team New Zealand for the 2021 Cup. Simon said “I’ll happily admit I still have no idea what’s going on”. His focus on the same motion but this time he’s turning to the grinding pedestals.

So van Velthooven is building up to become a burly grinder. Joe Sullivan is also working hard on the pedestals. Joe is an Olympic rowing champion who also sailing in the 2017 Cup. But, he learned how to sail when he was much younger at a club.Simon said cycling is still a big part of his life. He rides his bike to the gym and enjoys mountain biking a couple times a week. His focus right now is building upper body strength. A few times a week they head to Team New Zealand’s base where they practice grinding on the pedestals. Simon has also been sailing on TP 52’s.

The following are some quotes from Simon about sailing and his training.

Simon said “It’s slow and steady; nothing out of this world yet. But we’re progressing, which is the main thing.”

“It’s nice training new muscles, doing new gym movements, learning new things. My bench press has gone up quite a bit since we finished in Bermuda. There are no amazing numbers being achieved or anything, it’s pretty basic stuff. But you’ve got to get the basics right before there’s any action.”

“Getting on boats and learning everything from the bow backwards. I know much of the basics now, but there’s a lot of stuff going on, on the bigger boats.

“There’s nothing crazy and fast and exciting, but it’s still a good time, and there’s good people doing the sport, who are allowing me to get on their boats and learn from scratch.”

Good Luck Simon and Joe! I am sure you guys are learning quickly and will compete in the 2021 Cup!